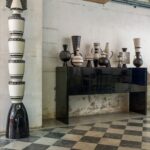 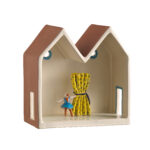 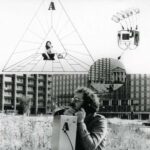 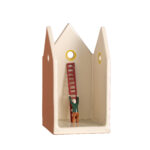 A tireless experimenter, he has worked in many different modes; from sign painting to conceptual art, from narrative art to artist cinema, using multiple media and conducting research that has resulted in the theory of the ‘unbalancing system’ - autonomous expression of the internal with Radical Design - and in important sociological themes such as La casa telematica  (MoMA of New York, 1972 - Fiera di Milano, 1983), Rapporto tra Spazio reale e Spazio virtuale (Milan Triennale 1979, 1992), La casa neo eclettica(Abitare il Tempo, 1990) and Cultura balneare (Catholic Cultural Center, 1985-95). He has disseminated his work through many exhibitions in Italy and abroad, and has curated several exhibitions at the Milan Triennale, the Venice Biennale, the Museum of Contemporary Art in Lyon, the FRAC Museum in Orléans, the Museum of Ceramics in Faenza and the Ragghianti Foundation. of Lucca. His work is researched and shared through exhibitions in Italy and abroad, whilst artistic collaborations continue to blend his history and experiences into unmistakable objects.

Born in Bussi sul Tirino, Pescara in 1938, Ugo la Pietra lives and works in Milan, where in 1964 he graduated in Architecture from the Polytechnic. Trained architect, artist, editor and lecturer, since 1960 he has defined himself as a researcher in the system of communication and visual arts, moving simultaneously within the fields of art and design.